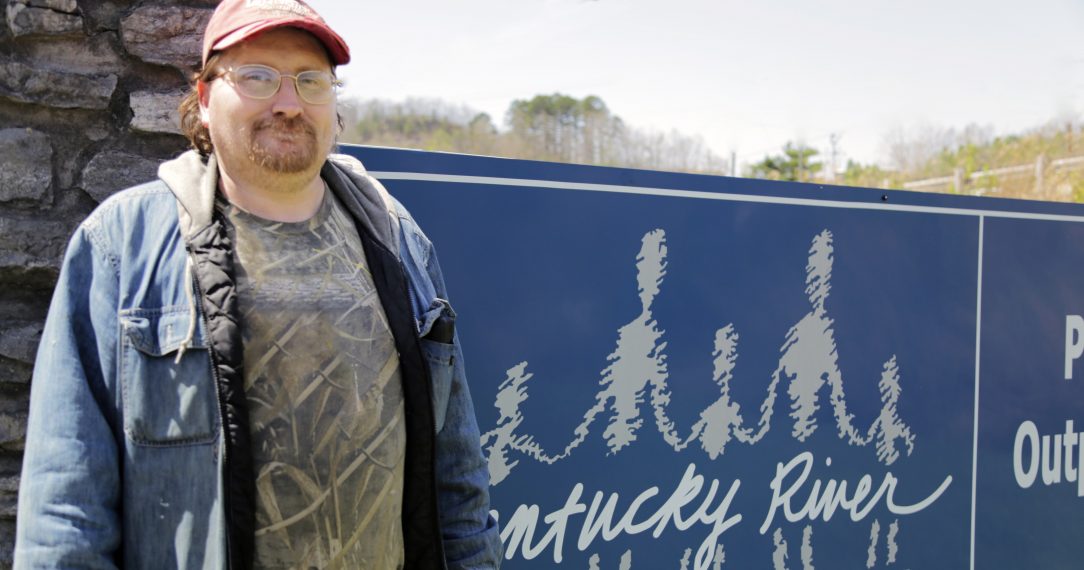 In the first installment of Kentucky River Community Care (KRCC) Success Stories, client Adam Park tells us the story of how he overcame a difficult childhood, homelessness, and three suicide attempts to now be living a life with a greater sense of purpose and hope with the help of therapists at KRCC.

Adam Park is a quiet, soft-spoken man. He breaks his life down into segments of time and a few series of facts, and if he didn't tell you those details, you'd likely never know that the mere sight of him sitting across from you is a flat out miracle.

"When I was going through my worst times, I didn't really have anybody to talk to. I kept everything bottled up," he said, choosing each word carefully, his Midwestern accent still hanging on strong. "But now, coming here to KRCC, I have somebody to talk to and can let it all out."

Letting it all out consists of him taking the listener on a journey across the flatlands, through Ohio and Pennsylvania, down streets he lived on and ran away on, before bringing you back with him to the hills of East Kentucky, a place that embraced him when he needed it most - each sentence a long brushstroke on canvas, painting you a picture of a life splattered all over with unfortunate events.

"He could see it, but I couldn't," Park said, speaking of a teacher he'd had years ago, who noticed his deep depression and mentioned it to him. "I thought I was fine."

Except there's no way he could have been.

His downward spiral, he said, started in childhood. He was a kid with ADHD, living in a home with two warring parents and a couple of older brothers. It was Christmas Eve in New Town, Pennsylvania, but instead of picking a present to open under the tree, Park was asked to make a choice between his mother and his father.

"The cops were standing there, asking us all," he recalled. "We all said my dad, but I didn't want to leave my mother. I told my mother that, and she told me to spend Christmas with my dad and she'd see me again in a couple of days. But I wouldn't see her again for two years."

On that day, two years later, he was sick and out of school, and his father and stepmother took him with them to the courthouse, where he found out that his mother had relinquished her parental rights, leaving him and his brothers in the sole custody of their father.

His mother disappeared from his life after that, but reality was so bad with his father, an auto mechanic, and stepmom that he and his brothers told them they wanted to go live with their mother.

"My dad balled up his fist and knocked me and my brother, Rob, both on the nose, and then, he walked over to my big brother, Walter, and decked him, too," Park said. "I filled up two shop rags full of blood."

He was eight years old.

By the time he was 10, his stepmom had taken him to the local children's home and left him. His brothers, who were older, either stayed at home or set out on the road for anyplace else. But there was a little light in all that darkness. After returning to live with his father in Ohio at the age of 13, his home life was still no better and he ran away, setting out on foot across 30 miles of highway back to Pennsylvania. He was eventually returned to the children's home for two years before being placed with a foster family that changed the trajectory of his life forever.

"When I'd been with my dad, if there wasn't enough money at the end of the week, I got blamed for it," he said. "So, when my foster family went out to eat, I wouldn't eat anything because I was afraid I'd be blamed for taking all of their money. They noticed me doing that and asked me about it. I told them why I did that, and they said they'd never do that to me, that they'd go without just for me."

"That's when I knew they cared about me more than my blood family ever did, and I started to straighten up," he added.

This is where you expect to read "and they lived happily ever after," but this is not that kind of story. Real life just isn't like that. And for Adam Park, those three years with his foster family were just the breath before the next long, dark stretch of road.

At 18, he moved in with his brother, quit school, and got a job. After finding out his brother was stealing his paycheck and his sister-in-law wanted him out of the picture, Park found himself homeless and living on the streets.

"A friend of mine asked me to go to Kentucky with him, so I chose to come down here," he said. "I figured I might as well move out someplace where I can prove I can make it on my own."

After moving to Hazard, the bad luck that had followed Park around most of his life made its presence felt again. Facing a 10 to 20-year prison sentence for a crime he said he didn't commit, Park was eventually exonerated, but he was left homeless again in a place where he had no close ties with anyone.

But he managed to get himself together and enrolled at M.C. Napier High School, graduating in 1994 when he was 21 years old.

He was drawn back to Ohio, though, in '98 and spent 13 years there before ever coming back to Kentucky.

He became a father, and for a little while, it looked like the bits and pieces of his once-shattered life were falling into place. But it just wasn't meant to be.

In 2010, his girlfriend told him to leave and that he'd never see his son again. Not knowing what else to do, Park set out once again for the Kentucky hills.

He said his son is "the spitting image of him" and wants to be a family, which is something Park sincerely wants, too, especially since his own father and grandparents died in recent years.

Now, his son is seven years old, and Park does see him from time to time, after his girlfriend decided the boy should have a relationship with his father.

It wasn't until 2013, though, that Park finally made his way to KRCC. For the first time, he was officially diagnosed with anxiety and depression and a mixture of counseling and medicine has made a huge difference in his life.

He credits much of his progress to clinicians Leslie Craft and Randy Kloth, who is his current therapist.

"Randy's (Kloth) a good guy," Park said. "He's a Christian guy like me. He and Leslie (Craft) both care about their patients like a therapist should." "But, you know, I almost didn't handle it," he noted, his voice trailing off, thinking of everything he'd been through that had led him to this moment.

He recounts trying to kill himself three times. Each time was at a different point in his life, when everything was spinning out of control.

"I stuck a gun up to my head and tried to shoot myself, but the gun wouldn't fire. I pointed it up in the air, and it fired. I did that twice," he said. "When I was in jail for something I didn't do, I tried to hang myself. The guards came by, saw me, and cut me down. The third time, I drank antifreeze, but all that did was make me sick."

"The good Lord must want me here for some reason!" Park said and laughed. "So, really, I haven't handled things too well, but I try to handle it the best I can."

Kloth disagrees, seeing instead the strength Park has within himself to withstand all of the challenges he's faced and having the courage to reach out for help.

"He's been through a lot. I think that taking all of that into consideration, he does extremely well," Kloth said, sitting at his desk at Perry Outpatient, a slow spring beginning to show signs of life just outside the window.

"He's good about keeping his appointments," he added quickly. "He even walked here once! We don't expect our clients to do that, but he told me it was good exercise. But he keeps his appointments, stays on his medicine, and has become very active in his church."

"I've also noticed how much he loves to help people. He doesn't come in here and tell me that. He just tells me about his life, and I hear it in what he tells me," Kloth said. "He visits people who are sick and does what he can to help out his church."

"He's still searching for his calling, but maybe that's what he's meant to do - help others and encourage them," he concluded. Park said he hopes his life experiences can show others they're not alone.

"Find somebody who's been through the same experience as you and talk to them. Compare notes. Talk to somebody who will listen," he said. "People can't understand what you're going through unless they've gone through it themselves, but a therapist tries to understand."

"At KRCC, they'll try to help you any way they can."