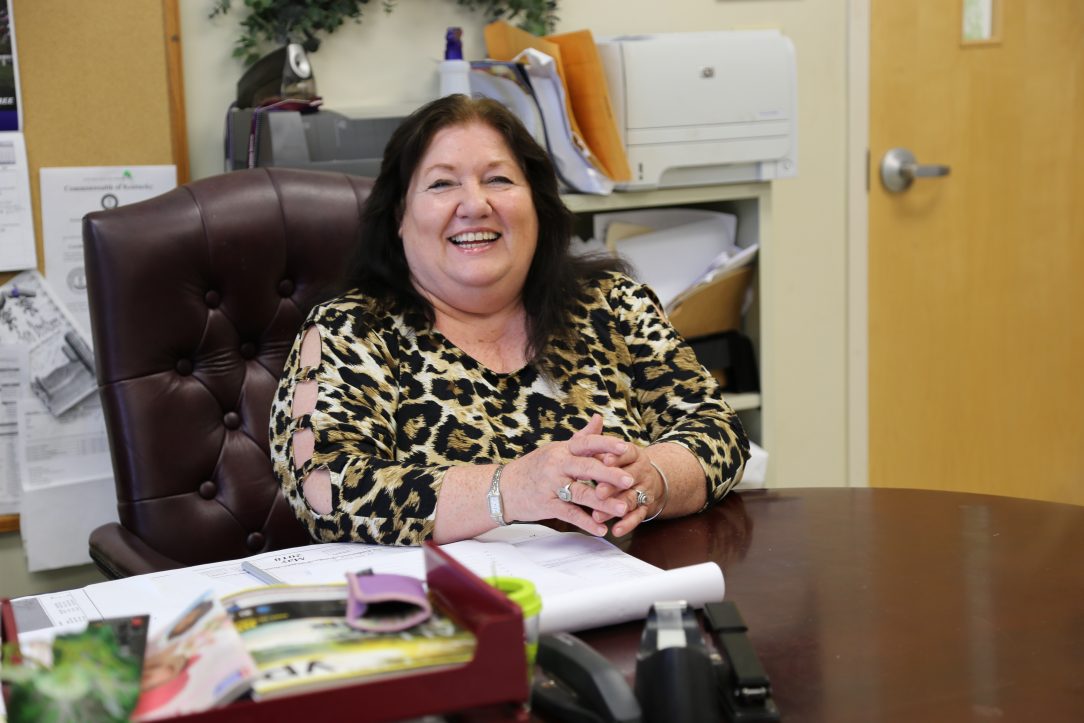 Pictured above: KRCC Clinician Wilma Baker has been making waves in the recovery world, churning out two of the region's most recent KYSTARS Peer Excellence Award winners.

KRCC Clinician Wilma Baker has been changing and saving lives at Lee County Outpatient for well over a decade. Under her guidance, many women battling substance abuse have claimed lives in recovery and have turned to helping others along the way.

"It's just something in me that I enjoy working with people in this way, especially with people battling substance abuse," said Wilma Baker, on a break between meetings at Perry Outpatient in Hazard.

When you hear about Baker's achievements in counseling, you'd almost expect to find a woman with a tough, hard exterior. But no - she is all love and light. She notes that she does set firm boundaries for her clients and holds them accountable, but it's clear that her smile, laughter, and mothering spirit must put them at ease.

And this wasn't even Baker's first choice as a career.

Raised in Covington, Baker attended the University of Cincinnati and Northern Kentucky University, where she decided that she wanted to own and run a Christian Daycare Center. But a Crisis Intervention class changed her mind.

"I remember telling my mother about it. I told her that I was going to go into counseling, where you go in and people tell you their problems. And she just had this look on her face," Baker said, laughing. "She said what's the matter with you? Why would you want to hear people's problems all day! She didn't get it at all. So, on my worst day, I'll say, Mom, I get it!"

Baker ended up moving to eastern Kentucky, where her family had ties, and found a job with KRCC in 2005. She started out in Project Addvance before being assigned to the SAP program in Beattyville, where she has remained, counseling countless people over the years at Lee Outpatient.

"I want to help as many people as I can through the addiction process," she said. "I try to help them understand what is going on physically with them. A lot of people say that (addicts) can stop if they want to, but they don't realize the biological effect on the brain. When I see a client, I want them to understand what is going on in their head and why they do what they do."

Despite her studies and the special understanding she believes she has developed for her clients, Baker still says there are times when she feels "helpless" to help them.

"I see their hurt and their guilt and how bad they want to quit, but yet the people, places, and situations in their lives make it so difficult for them to cope with their emotions and stress," she said.

But whatever she's doing to help them must be working. With her guidance, some of her clients have become highly successful peer support specialists, with a few of them picking up awards on the state level. For Baker, these women, now living lives in recovery and willing to give back, are an important link between the client and the therapist and contribute greatly to the success of the team approach Baker claims is so significant in substance abuse counseling.

"I tell people all the time that more therapy goes on out there on the sidewalk than it does in my office," Baker said, referring to group therapy and the availability of peer supports. "Peer supports fill the gap between the client and clinician. So, when the client sees somebody in the middle who has made it, someone who's encouraging and can relate to them and wants to help them, that's a very important and helpful step between."

For those peer supports who have won awards and special recognition, Baker said she feels they deserve it.

"They've put forth their heart and all they have," she said. "With everything you do, you hope you plant seeds and that everything you say makes a difference in somebody's life. I'm glad they achieved this and that they're doing well. I'm so happy for them."

When it comes to counseling, Baker credits her success to the help she's received from her friend, Debra Teague, and the support and guidance of Judy Cattoi.

"Judy has always been there," Baker said. "She's taught me a lot and to look deeper inside the theories. I've learned to let the client think about it and identify issues without me telling them what that is - that way, their behavior can change."

If you'd like to make an appointment to see a mental health or substance abuse counselor, please call your nearest KRCC Outpatient office (phone numbers, addresses, and more info can be found here) or call our 24-Hour Crisis & Information Hotline at 1-800-262-7491.