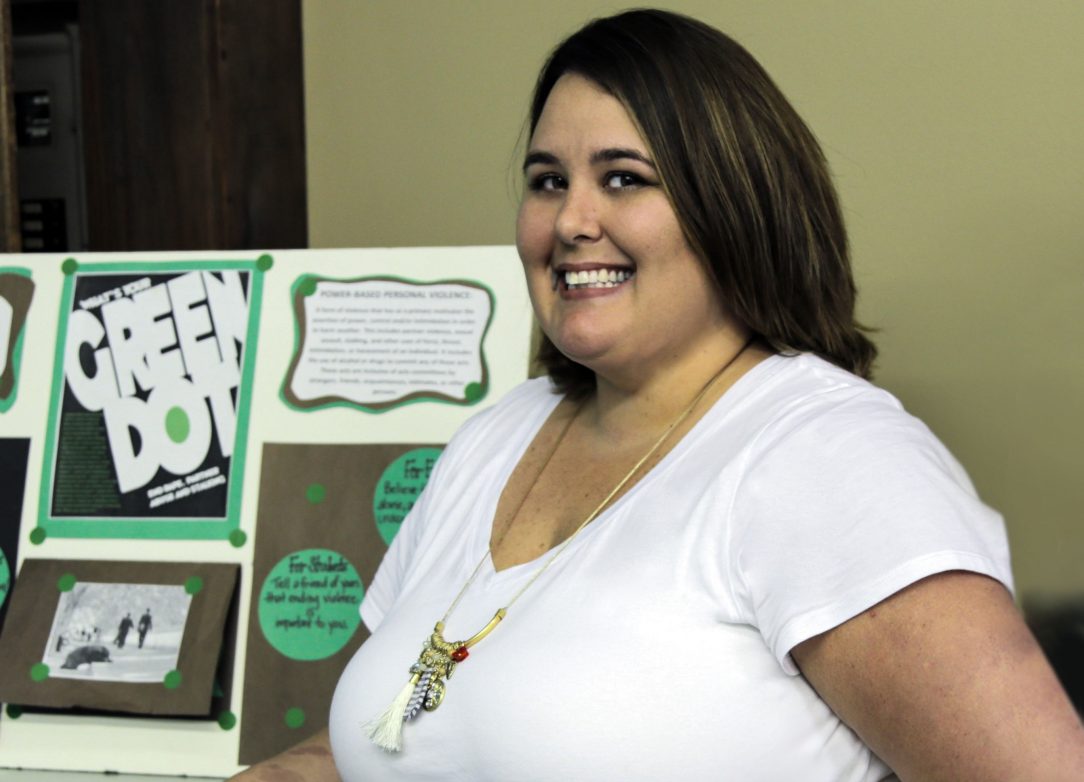 KRCC's The Rising Center is taking the Green Dot Program to the schools and the community to encourage others to stop violent behavior wherever it occurs.

At the start of the 2018 school year, two separate incidents forced Perry County Schools into lockdown mode. Staff at The Rising Center took note of that and was reminded yet again that our schools have become battlegrounds, reflecting the violence woven into our national culture.

The Green Dot Program, which was founded in Kentucky but is now a nationally-utilized prevention program, aims to end power-based personal violence through bystander intervention, and it is this program that The Rising Center feels can make the changes we need to see not only in our schools, but also in our communities, workplaces, and homes.

Kristy Eversole, The Rising Center's Community Educator, along with other staff members, has been tasked with implementing the program at Knott County Central High School and, for the first time, Jackson City High School in Breathitt County. Eversole said she anticipated teachers telling her how needed the program is in the schools, but she was struck by the number of students who told her the very same thing.

"This program opens up a channel and helps bring things to the surface for the students," she said.

"You do get a lot of disclosures," added Holly Combs, the director of The Rising Center. "Kids see you as a safe person to open up to, and they've been waiting for a chance to do that. Things happen, and sometimes, kids don't want to tell their parents that they need to go to a rape crisis center. We let them know we're here."

Combs noted that students must have parental consent to participate in the program, but all students are given an overview of bystander intervention that helps them understand what they can do to stop bullying, sexual assault, and violence (this includes violence in relationships).

"We stress to them that if you see something happening, you have an obligation and a responsibility to do something," Combs said. "If we don't do anything, we're allowing that to continue and we're perpetuating the norm that's out there."

Eversole and Combs pointed out that all people have personal barriers they must overcome in order to step in and stop the wrong actions and situations they see happening, but Green Dot gives them the tools they need to rise above their fears through the three Ds: Distract, Delegate, and Direct.

For example, if someone sees a "red dot behavior," like bullying, they can distract the bully by making a loud noise instead of confronting them. Others may find directly confronting the bully more effective, but they can also delegate that task to a teacher or parent.

"That's what I love about this: it's the cumulative effect of small actions," Combs said. "If you do something, somebody's going to see you doing it; and, if we all do that together, we can change the culture around us."

In light of the ongoing #MeToo Movement and the growing list of mass shootings, Combs said it's a great time to have the program available to students and high school staff.

"No one can do everything, but everyone can do something." Holly Combs, Program Director of The Rising Center

The program runs throughout the school year. After providing the overview, several students are identified by their fellow classmates as being "public opinion leaders," which means they have a social influence in the school. That group of students is then trained to implement bystander intervention in the school. "It has absolutely been successful," Combs shared. "It's kind of empowering in that it has the potential to alter norms. And it is an evidence-based program - it's been shown to reduce violence by a certain percentage, depending on how closely the model is followed."

It is that success that has led Combs and her staff to think of more ways to make the community more aware of the affects of bystander intervention.

"Envision a map. Every time you see a violent act happening, that's a red dot. And our maps are all red," Combs demonstrated. "We have to do something about that."

Eversole noted that most people are already replacing "red dots" with "green dots," but they don't realize that that's what they're doing. She gave an example of a local kid who recently uploaded a video of themselves singing to a social media site. When Eversole began reading the comments on that video, she anticipated seeing this kid torn down by the words of others. Instead, she watched as the negative comments were drowned out by all of the positive ones.

"That's exactly what we want!" she said. "Hopefully, Green Dot will put that in everybody's mind."

"Intervene when you see that someone needs help or someone is hurting."Holly Combs

The current school year marks the first time that Green Dot will include high school seniors and college students in its program. Eversole said she is excited to get started this September and will monitor the progress made.