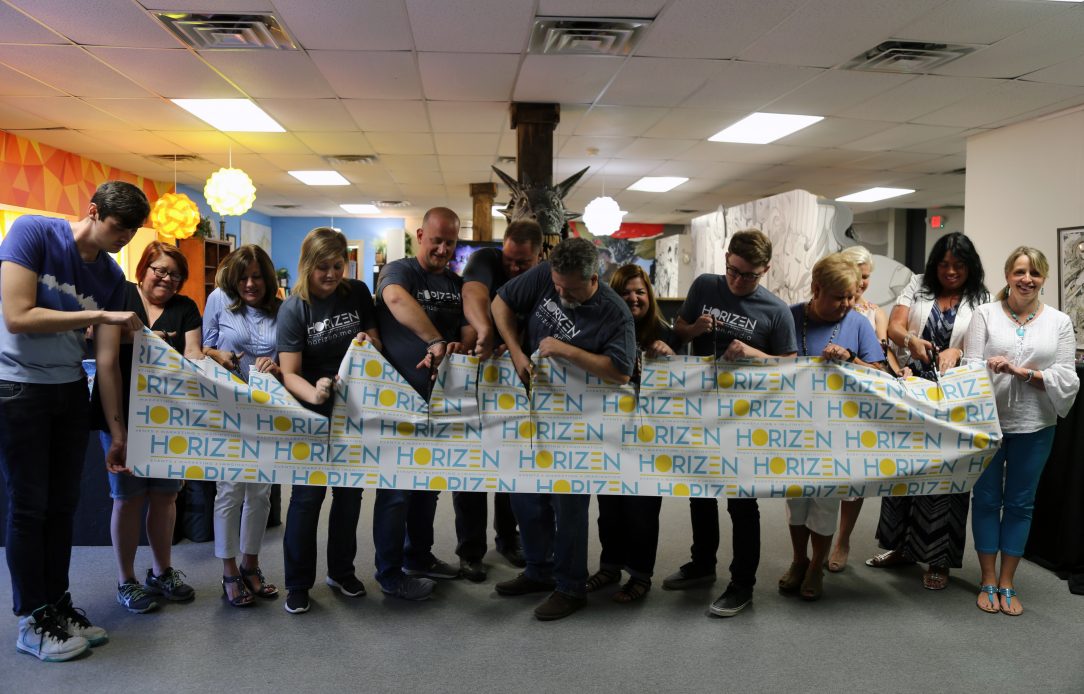 HoriZEN Events, Marketing & Imagination unveils its creative, new space - a workstation filled with artwork, inspiring words, and other visual wonders. A "dreamspace," think tank, and workshop all in one, KRCC's media team is now ready to take their work to new heights.

Caney Digital Media, the media wing of Kentucky River Community Care now has a new home. After years of having its employees working in different locations throughout the region, KRCC CEO and Executive Director Mary Meade-McKenzie decided to relocate the team to one primary location so that, for the first time, the team would all be able to work together in the same space every day.

Charles Boggs, the agency's chief information officer, who also heads the media wing, has been hoping for this move for years.

Now, the media team will work out of 1133 North Main Street in Hazard, the former home of the KRCC Reclaimed store, which closed earlier this year.

The department also has a new name, which is a bit more reflective of all of the work it does: HoriZEN Events, Marketing & Imagination. In addition to producing media materials for the company in-house, the team will also act as a resource for the entire community.

At the ribbon cutting and grand opening celebration, the community support and excitement was palpable. As guests filtered in throughout the day, there was one overwhelming feeling that encapsulated the experience: Hazard has never seen anything like this before.

Perhaps the most special feature of KRCC's media department is this: it boasts six highly creative people working together in one place. Years ago, CIO Charles Boggs laid the foundation for the media wing, but now, with the collective talents of all of its members, it now has the ability to rise to the next level.

Along with Boggs, who is a visual artist outside of his work at KRCC, there are the two original members of his media team - Charles Shouse and Pearlie Jones. Shouse is a film director, who creates films, commercials, and videos for the agency. Jones functions as Shouse's right hand before and during filming, and also performs a plethora of tasks including building sets and other needed items, makeup and costume design, data gathering, and helps design and distribute promotional materials throughout the agency.

Over time, the team has added more members. In 2015, it added Mindy Beth Miller, a writer who now functions as the agency's multimedia writer. She crafts content for websites, churns out articles and press releases, and creates various publications from newsletters to literary journals and magazines. Then, the team added Timothy Deaton, who has extensive experience in planning and hosting events, fundraising, vending and exhibiting, decorating, and public speaking. Finally, one other member was added in Jonathan Nickles, a web developer and designer, who also creates branding, identity, and print media.

"I've had the great fortune to watch a little spark turn into a creative fire, and that fire is HoriZEN," Charles Boggs said. "It's fed every day by the talented people who work here. If you need a jolt of creativity, a big idea, or just a place to dream a little dream, come sit by the fire and let's 'What's If' together."

If there's one thing HoriZEN wants to do, it wants to inspire the people in our region to dream big and to realize that great things can happen here, too. For KRCC, regional recovery is one of the most important puzzle pieces in improving this area's quality of life, which directly affects mental health.

"I hope this opening is just a prelude of many awesome things happening here," said Robert Donnan, the Kentucky Coordinator working on the seven-county Energizing Entrepreneurial Communities.

The team already has exciting projects in the pipeline, and we look forward to sharing that news as we push forward.

To find out more about HoriZEN, visit their website.