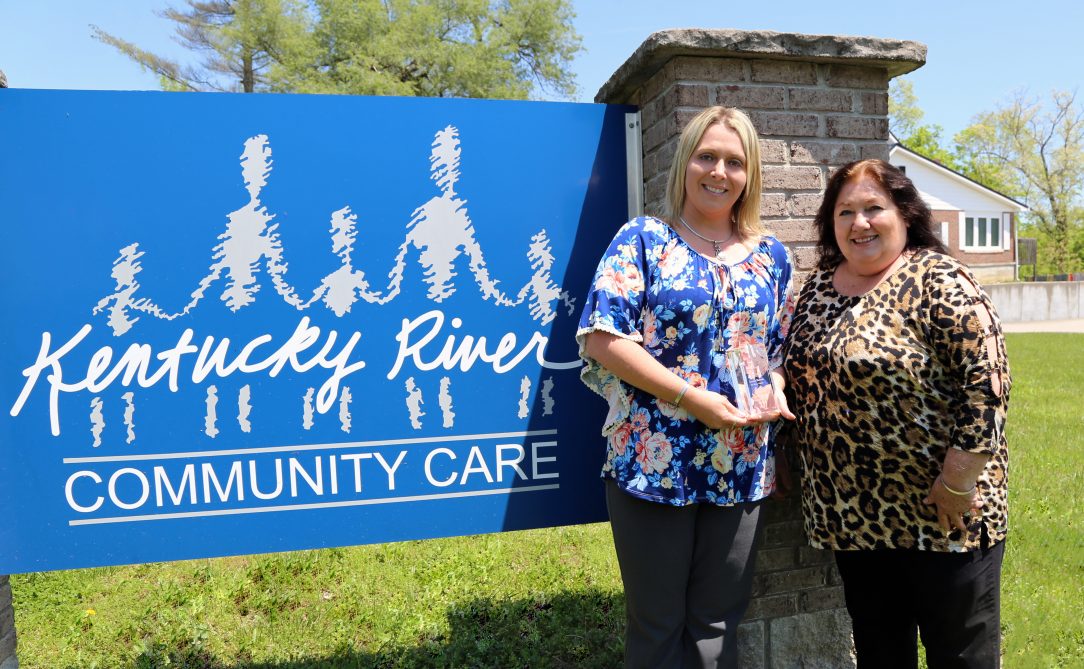 KYSTARS, which stands for Kentucky System Transformation – Advocating Recovery Supports, is a unique, statewide group consisting of behavioral health consumers, professionals, administrators, and family members working together to promote the reality of recovery in Kentucky.

The awards are given in celebration of Mental Health Month, with outstanding peer specialists selected from each Community Mental Health Center (CMHC) region in the state.

For Barrett, leading a successful life in recovery began with blessings in disguise.

“I got in trouble, which I was very thankful for,” she said, retelling the painful events of her life one by one. “I went to jail in Madison County and ended up staying 30 days. The first seven days, I was in the hole detoxing.”

Over a period of seven hours, Barrett said she hallucinated, seeing horrifying events play out in her mind that, according to her, she wouldn’t wish upon anyone.

“I literally saw the devil,” she said. “Whenever I came to myself and got out of that mess, I said never again.”

Barrett’s drug use started during a time in her life when she was the most vulnerable. Her marriage had ended, and later, she found herself in a relationship with an addict, who convinced her to try drugs for the first time.

“I had never thought about doing anything like that,” she said. “It takes only once to get addicted. People say, well, you never should have done it. When I did it, I didn’t intend to become an addict, but (I kept on using drugs) for six months.”

“I just got worse and worse,” she added.

A stint in jail was the wakeup call Barrett needed. Afterwards, she ended the toxic relationship she was in, and in addition to drug screenings, received counseling once a month with KRCC Clinician Wilma Baker.

“She’s a wonderful person and a great counselor,” Barrett said of Baker. “She has a positive outlook for everybody, no matter their situation.”

It was Baker, in fact, who first suggested that Barrett become a peer support. Within a year after applying for the position, Barrett received her training and began helping others with the same issues she’d had.

From that time until now, nearly two years later, she has served as a peer support specialist for substance abuse and mental illness and is also a part of KRCC’s ACT Team (Assertive Community Treatment), which involves more extensive mental health treatment.

“It’s wonderful that I’ve come so far to be here, knowing that I can help people who are like me the way I was then,” Barrett said, the light of a fresh, spring afternoon shining on her face. “If I could help just one person – if I could save their life, I mean, that’s a big deal.”

Barrett acknowledges that there is a sad part to her job, which is trying to reach those who unfortunately do not make it through the disease of addiction.

“If you can’t be true to yourself and want to be a better person, you’re not going to be,” she noted. “You can’t live a lie. It harms everybody connected to you. You just have to want it (recovery) for yourself.”

When she claimed her award, which came as a total surprise to her, Barrett thought of her father, mother, and brothers, as well as her two young daughters.

Speaking of her daughters, she said, “Maybe in the future, when they’re older, they can look back at the story I had and know not to ever try drugs that first time or be around the people, places, and things that can put them in contact with drugs.”

And despite everything, she says she is grateful for the difficult experiences she’s had.

“I thank God every day, because I could still be a full-blown drug addict. I could have been in and out of jail, and I could have lost my children,” she said.

Now, she offers support and advice to people struggling with addiction and mental illness in four counties, and Baker, who supervises Barrett, considers her an important source of help in her counseling.

“She’s empathetic and sympathetic to the clients,” Baker said. “She’s been there, done that, and can identify with the clients. She can help me, as the clinician, understand the client on a different level. They might not talk to me about certain things, but they will to her. So, we work really well together as a team.”

Baker said winning the award was much deserved for Barrett and that she’s completely dedicated to the clients. “If you really want (to get better), you’ve got to start somewhere, and KRCC is an awesome place to start,” Barrett said. “It’s got me to where I am today. It’s the start to a brighter future.”

“Take all the support you can get and be honest with yourself,” she advises those battling addiction. “Be honest with your counselors, peer supports, and community supports – whoever you come into contact with. Do your best and truly want to change, because if you do, you can start from the bottom and keep going up.”

For those needing help with addiction and would like to make an appointment to see a counselor, call KRCC’s 24-Hour Crisis & Information Hotline at 1-800-262-7491.