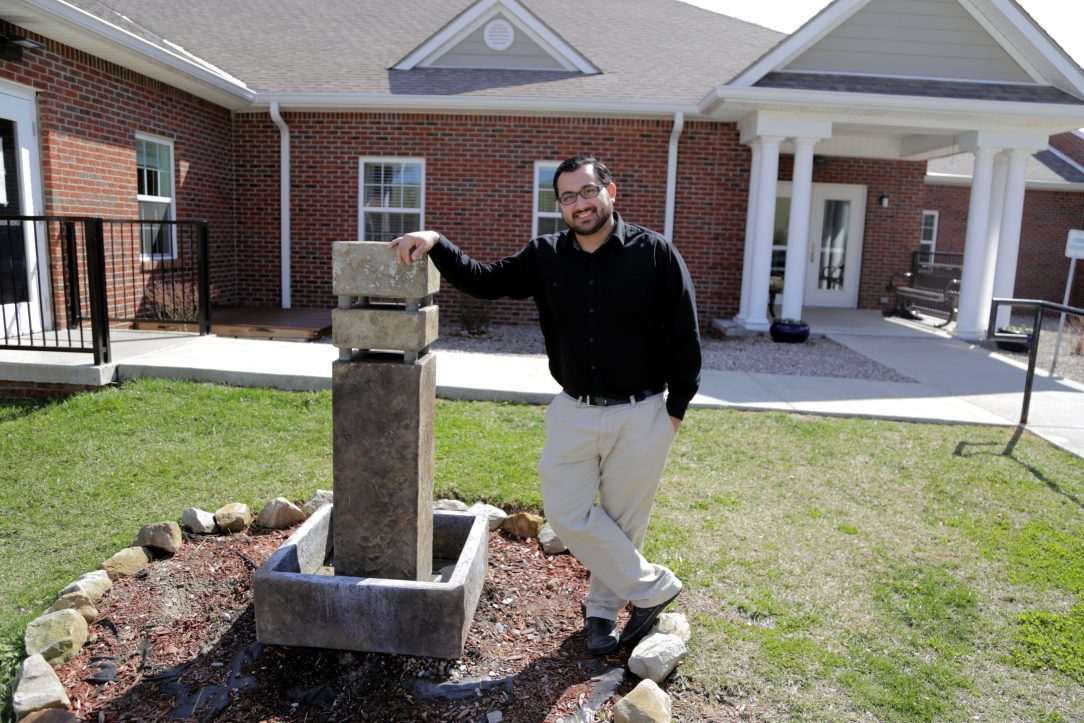 When Francisco Gamero left his native El Salvador, he wanted to make a better life for himself in the United States. Now, as the new director of Kentucky River Community Care's (KRCC) Hickory Hill Recovery Center, he's changing more lives than he ever imagined.

Born and raised in El Salvador, Gamero came to the United States on a sports scholarship from the University of Pikeville (UPike). He studied business administration and health management, but like most people in eastern Kentucky, struggled to find a suitable job after graduating.

"I had a friend who passed away because of drugs," Gamero said, sitting in his office at Hickory Hill. "And I have family members who are addicts. So, I was always interested in finding a career in recovery. I just didn't think it could happen."

Gamero said he wanted to help people, but he couldn't find a job that would provide an outlet for it. After talking things over with a close friend, he was eventually introduced to KRCC Executive Director and CEO Mary Meade-McKenzie.

"I thought it would be impossible for me to get a job at KRCC, because I was all set to start a new job in a little over a month," Gamero explained. "But apparently, things are not impossible for Mary (Meade-McKenzie)!"

Since accepting the job as the new program director at Hickory Hill, Gamero has been busy becoming more acquainted with the program, his staff, and the men who are striving daily to lead lives in recovery.

"Jennifer Erwin (the former program director at Hickory Hill) really helped me a lot at the beginning to understand the things I needed to be looking out for," he shared. "What I love about this position is that I have the ability to have a one-on-one relationship with our clients." "You can't teach passion, and our staff has that. We're all trying to do this out of our own hearts."Francisco Gamero, Program Director - Hickory Hill Recovery Center

The first change Gamero made to the program was a simple, but important one: as each new client enters the program, they are brought to meet him.

"In the first two weeks, I realized something real quick," Gamero said. "The men look at this as doing time. That's not right. So, I wanted to meet each man and talk to him, so that he could see that he's here to get help and recover. I want the men to know that everyone here cares about them, and so far, most of them have reacted really well to that."

Moving forward, Gamero is most excited about the "Culture of Recovery" project, which is a partnership the Recovery Center has with the Appalachian Artisan Center in Hindman to teach the men trades in the arts. The project is currently in its early stages.

"We want the guys to get motivated," he said. "We don't want them to get burned out on the program by being here 24/7, feeling the suffering they feel every day. That's a really hard thing, so we hope this project will help ease their pain, but at the same time, give them skills they can use in their communities."

Currently, the Artisan Center is looking for artists to lead workshops for the men in welding and blacksmithing, carpentry, masonry, pottery, and luthiery (musical instrument building and repair).

Another goal for the program, as noted by Gamero, is for the Recovery Center and its clients to foster a stronger and better relationship with the community.

"We want the community to know that we are a positive thing for them," he said. "In April, we're going to start helping cleanup efforts in Knott County."

More community projects will likely follow, and Gamero is confident that these efforts will be a reward for the area as well as for the clients.

"We want people around here to see the difference that Hickory Hill is making. We're here to support the community," he added. "That's why we want to be more involved. We want to keep a full house and to keep these guys working so that we have more and more success stories."

"We want the community to look at us and say, they really changed somebody's life."

At present, the program has 94 men in residence, but with a long waiting list, staff plans to fill up the remaining slots, bringing the Recovery Center's number of clients up to 100. Gamero said client retention is going to be a focus of the program this year. Above: Gamero gives his first interview to WYMT-TV.

"These guys deserve an opportunity to do the right thing, and I feel that Hickory Hill has the responsibility to make that change. There are doors opening for us right now that are going to be the first steps on getting these men where they need to be."Francisco Gamero

"We've had visitors here - from the state - who say they see something positive in this house," Gamero noted.

And it's something he himself has seen during this very early phase of his career at Hickory Hill.

"If I can get more and more of these guys graduated, that's going to be a win for us," he said.

"When a guy leaves, and I hear about him later on, that he's doing well and working and doing his 12 Steps, and then, he comes back here and shares his success story, that's when I'll know we've done something. That's what we're here for."

As he's worked with the staff to change lives, Gamero said he's noticed a change in his life, too.

"Already, some of these guys have changed my life. I've learned to be a better person, and I want to be better for them. I've grown in a million ways, and I'm so thankful."

"This is a wonderful program. These guys are unbelievable, and they have tremendous stories to tell!"

Keep up with news, updates, and events at Hickory Hill Recovery Center by connecting with us on Facebook.