KRCC’s Sapling Centers, or youth drop-in centers, have been transforming the lives of our region’s youth. This is just one of their stories.

“I really didn’t know these places even existed,” said Ethan Montgomery, sitting in the study area of KRCC’s Sapling Center in Hazard. “I thought it was just something somebody made up. And then, I came here and all of this was happening, and I was like, it actually does exist! There’s a safe place.”

A safe place. That’s something every child should have, but now at 18, Ethan said his life has often given him everything but that. He was removed from his birth parents’ home at the age of four due to abuse and neglect, and after that, he was bounced around from place to place, suffering verbal, physical, and sexual abuse throughout his childhood.

“I kept it a secret for the longest time,” he said. “It’s just one of those things. Not everyone is going to believe you, but you have to know the truth.”

After moving out of his final foster home and leaving foster care for good, Ethan found himself homeless and was “couch crashing,” staying at the homes of various friends just to keep a roof over his head.

But that wasn’t the only obstacle Ethan faced. He was diagnosed with manic-depressive disorder with psychotic symptoms, an illness that causes him to hear voices and see apparitions. And he was struggling to make sense of his sexuality, having come out as bisexual, which led him to experience a lot of bullying in school and out.

“I was trying to be true to myself, which I’m still working on,” Ethan said. “And I’m working on finding safe environments for me.”

Those safe places are the home of his last set of foster parents, his church, and The Sapling Center.

“I’m used to trying to hide and not be myself or be open about who I am,” he said. “I’m not 100% sure about who I am, but I’m trying to work through it and being a part of this program is helping me a lot.”

Calling The Sapling Center “the melting pot of Hazard,” Ethan said it has helped him a great deal to be able to receive therapy at the Center while also mixing socially with people who are more accepting and open and have had similar life experiences.

“Before I came here, all I would do is just stay in my room, but here, I’ve made more friends and it’s a more sociable place,” he said.

“I’m focusing on my mental health right now and hoping to get that back on track.”

And when it comes to people’s reactions to him and what all he’s been through, Ethan knows that all depends on the individual and what they can handle.

“I’m not going to say I handle it great, but I get by. And right now, I’m trying to figure out how to do more than just get by,” he added.

The most important thing, Ethan said, is that he’s no longer having to deal with everything all on his own.

“Back then, I wish someone would have talked to me and maybe I would have had more help with my mental health and wouldn’t have been so ashamed of being bi.”

“When people don’t take time to pay attention to what you’ve been through, they usually don’t understand you.” – Ethan Montgomery

Through KRCC, Ethan said he’s gaining confidence in himself and in his interactions with other people. And now, he wants to use his story to help others.

“The world seems so broken and torn, so I want to do a little bit of good and maybe help others get through what they’re going through,” he said.

“I hope it gives them some hope.” 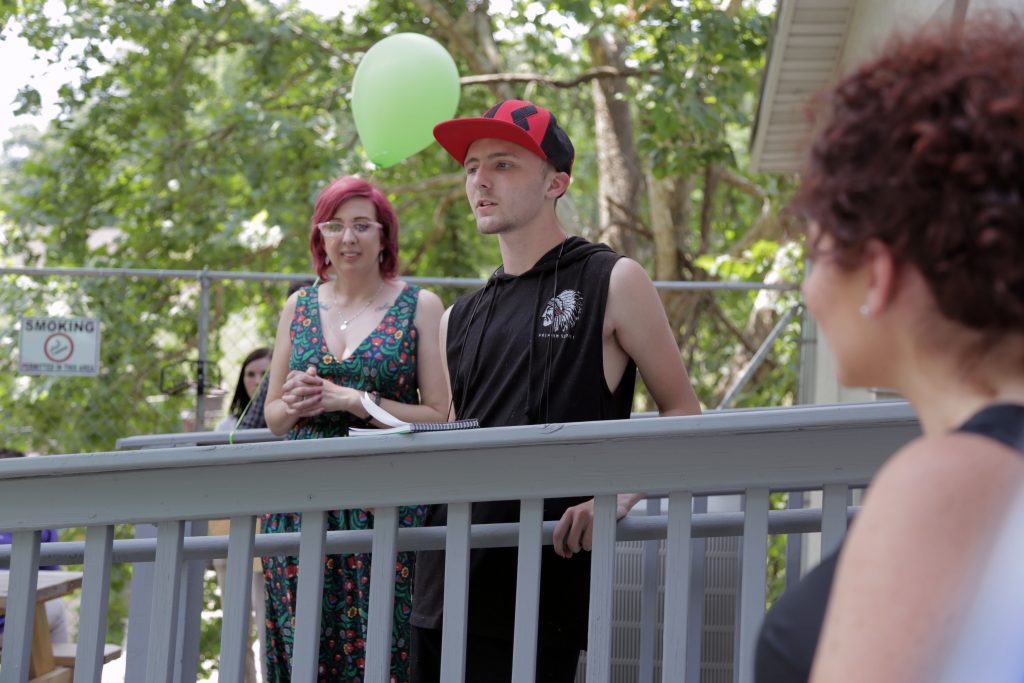 “When you’ve been tossed around from time to time, you don’t think you’re going to stay in one place much longer. It’s kind of like a learned gypsy soul. But I started coming here more and began considering this place like a family.”

And in telling that story, he’s also doing the difficult thing of being completely honest about his life and revealing the mistakes he’s made while trying to understand himself and the bad things that have happened to him.

“This is a process of me trying to accept what I’ve done, too,” he noted. “I do regret those things and I am ashamed of them, but at the same time, I’m not going to hide my mistakes and point out everyone else’s.”

Ethan said he would like to do public speaking on behalf of KRCC and The Sapling Center in Hazard in an effort to reach kids in the other Sapling Centers, youth groups, and schools.

“Growing up in group homes, I knew lots of kids who committed suicide, self-harmed, or who were sexually assaulted,” Ethan said.

“People often don’t understand kids like me,” he explained. “If I hadn’t been abused, maybe I would not have abused (in turn). If I hadn’t been bullied, I probably wouldn’t be so insecure. It’s about being angry at the world and (yourself) and trying to figure out who you are, but going about it in the wrong way.”

Those wrong ways and wrong turns are what he wants to help other kids – and even adults – avoid.

“Just think – what if those kids had had a place like this? Maybe their lives would have been better.” – Ethan Montgomery

In addition to all of the help Ethan has received at the Center, he’s also gotten something else – something he hasn’t had in a long time: his own home.

Staff at The Sapling Center helped him fill out an application for housing, and now, Ethan has his own apartment.

“Ethan’s transformation in confidence, self awareness, and overall identity has been inspiring and motivating to the youth and staff at The Perry Sapling Center,” said Angie Bush, KRCC’s director of transitional age youth, who leads all of the agency’s Sapling Centers.

“He has transitioned from a shy, self-isolated young man to an advocate not only for himself, but for homeless transitional age youth and the LGBTQ community as well,” she said.

Angie added that his advocacy has also led the program to be more youth-driven and to add more supports for the transitional youth population the Centers serve.